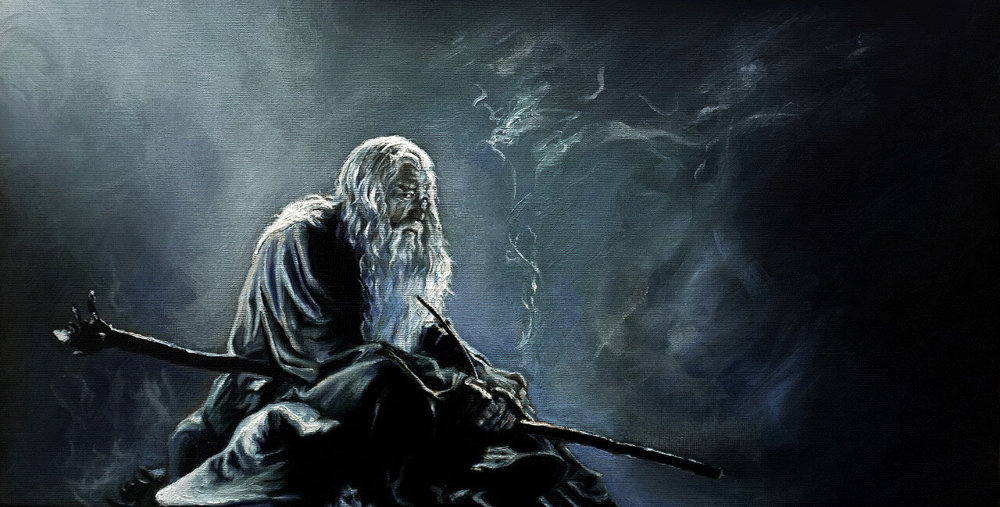 Trapped inside the Mines of Moria, the Company of the Ring must find their way tto reach the eastern door. But with every step they take into the Mines, there is a growing sense of dread, named the Balrog.

The setup of the campaign mode adds 4 more burden cards to the game. Ususally, shuffling that many additional burden cards into the encounter deck means doomed by itself — I remember playing the quests from the saga many times with 4 players. This time I am playing it solo for the first time. Not many of the burdens did appear so far. This beeing said, I am really looking forward to play this quest. I even dream of not have to keep all 4 new burden cards.

There are 2 ways to beat this quest. First, take it slow, build an army, sacrifice a hero (thematically this would be Gandalf) and kill the Balrog. Second, quest hard and run through the mines before the balrog appears. The second approach is almost undoable within multi player, because stage 3a removes one counter from Doom, Doom, Doom for each player. This is equal to reduce the rounds before the Balrog appears by one for each player. But with just one player this comes into reach.

With a head start of 5 Hobbit heroes and an early Red Book of Westmarch, it could be possible to have enough willpower to do so. Lets try it. To be able to play the Book as early as possible, I switch my Frodo Baggins (which helped me alot to circumvent really bad cards) to a resource giving one.

My first hand does not contain the Book, so I muligan. Still no Book. Even no Thorongil, a card I really like to see early on. Luckily, I even do not want to engage enemies in the first stage. I do have a Resourcefull, a Fast Hitch and a Gaffer Gamgee. These cards do feel like the second half of my main combo of this deck. At least I can quest quite ok-ish and nothing bad get revealed. In the second round I draw the Book! And I can play it. An enemy gets revealed, an Uruk from Mordor. Thanks to Gaffer Gamgee it does not attack. In the meantime I can get my attack power up and in the next stage I have to search for Orc-Chieftain. This would be my second of three needed enemies. Thanks the chieftain, I even can engage both of them within the same round. Luckily, I get another enemy in the next round. Thanks to some Fast Hitches I can kill all of them.

The rest of the game is quite easy. Just quest and some — lets call it — hit ’n run, finishing the game after 7 rounds and 24 minutes of play. As I have to choose only two burden cards, I select Pursued by the Enemy and Overcome by Grief.

The Lord of the Rings card game is a living card game by Fantasy Flight Games. The head line picture is taken from Gregory Classics. Doom, Doom, Doom is a card from the game itself, taken from Hall of Beorn.