Since Drinking Song was released I wanted to rebuild a Outlands/Erestor deck. That card clearly has its Hobbit references with its illustration and a bonus if you have a hobbit hero, but honnestly it shines in an(y) Erestor deck. 10 starting cards and still no Steward of Gondor? Doesn’t matter if you have a Drinking Song on your hand. That card accelerates your round one!

END_OF_DOCUMENT_TOKEN_TO_BE_REPLACED

A deck which aims at multi-defend, quest power and in late game also killing enemies. It focusses on some core cards of Gandalf shenanigans, but mostly on dwarf power. The starting threat is high, but unless you face heavy doomed encounter decks you end the game with a lower threat.

This deck is fun to play, effective (lots of willpower, a good defender from the start), save (Gandalf’s staff, Armored Destrier), but somewhat time consuming to play because every Gandalf deck has to be managed well. I disassembled it, because a teammate started playing dwarfs.

END_OF_DOCUMENT_TOKEN_TO_BE_REPLACED

A deck which cannot really quest, but handle almost each and every enemy in play. Either needs a mate, who has a (single) defender ready or needs to draw a chump blocker more or less each round on its own. It focusses around Aragorn to engage enemies and Merry to ready Aragorn again, plus another Hobbit hero to buff Merry and also have access to the Lore sphere.

Core cards to this combo are the mentioned heroes plus readying effects for Merry, Rohan Warhorse and Fast Hitch. I had to rebuild this type of deck because of a new card Friend of Friends, which buffs the two hobbit heroes, a bit later Drinking Song, which lets you fetch your wanted cards even faster, joined the arrangement.

Very multiplayer friedly. Does profit if the other players also do have a low threat. Quite effective. Gets boring after a few games. This is why I took this deck apart. 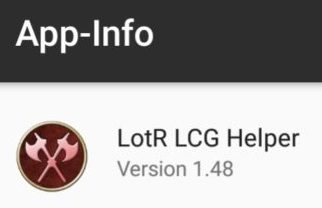 A new version is online. I added mission names and icons up to number 71; Mount Gundabad. Also, there was a mix-up with „The Treachery of Carn-Dum“.